Cannabis, ayahuasca and other ‘Plants of the Gods’ as spiritual tools

Throughout history people have used psychoactive substances like cannabis, mushrooms and ayahuasca as spiritual tools. Some scholars even suggest that the use of these substances lies at the root of the very first forms of organized religion. The links between drugs, spirituality and religion were the theme of a fascinating event at Amsterdam’s Lloyd Hotel on November 6, 2019.

‘In Drugs We Trust – An evening on the marriage between psychoactive substances and religious experiences’ was organized by the Hash Marihuana & Hemp Museum and a new museum in formation called Poppi Drugs Museum Amsterdam. The large room in the Lloyd Hotel where the event took place was perfect for the occasion, with high ceilings, wood paneled walls and a small balcony. The lights were dimmed, there were hemp carpets and cushions on the floor and little altars with Buddha and Hindu statues created an ashram kind of vibe.

Host Steven Kompier welcomed the audience and walked us through the program. First up was a video by Canadian author Chris Bennett, one of the world’s leading authorities on the history of cannabis. He explained how cannabis has played a role in pretty much every ancient and modern religion, including Judaism, Christianity, Hinduism and Islam. Bennett: ‘In regards to spiritual experiences, I think the oldest reliable evidence comes from Andrew Sheratt, who suggested that evidence of 5.500 year old polypod bowls found in the Ukraine region, were used in a ceremonial type of way to burn cannabis.’

Bennett read out some great quotes, including one from French author Louis-Alphonse Cahagnet. In his book ‘Sanctuary of the Human Soul’ (1840) Cahagnet wrote: ‘It is my conviction that hashish develops in us the spiritual state in which each may find disclosures answering to his inclinations.’ Bennett can confirm this from personal experience, he said. ‘I came to study cannabis for the last thirty years after a spiritual experience I had under the influence of cannabis in late 1989. And like a lot of other of these experiences, I think there’s more than just the drug involved. I think a lot of the times it’s a certain set and setting.’ 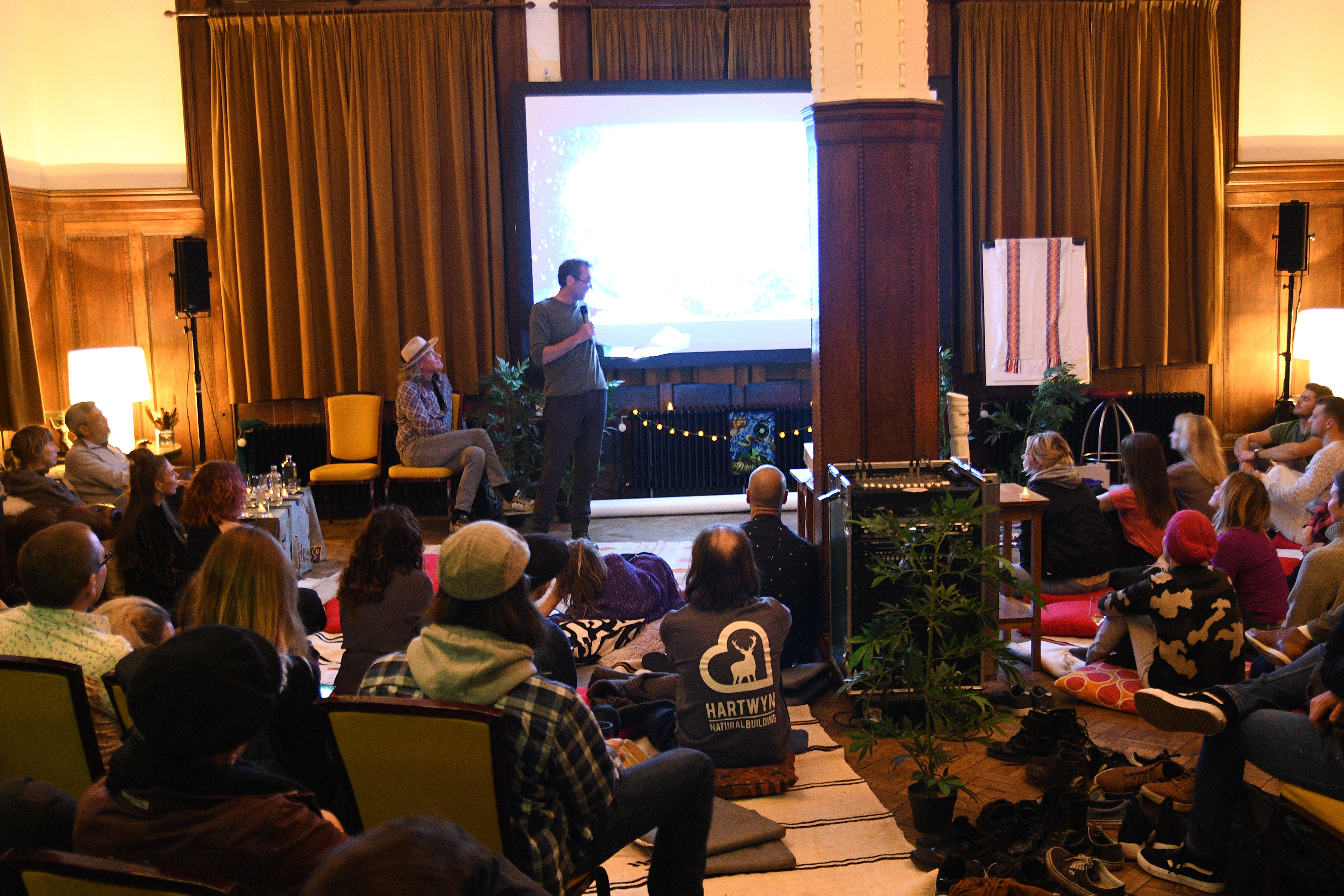 After the video, Gary Laderman took to the stage. He is a professor of American Religious History and Cultures at Emory University in Atlanta, Georgia. Laderman talked about a course he started in 2017, called ‘Sacred Drugs’. It turned out to be hugely popular with his students. Laderman is currently writing a book exploring religion and drugs and got part of the audience up in arms over his notion that the spiritual use of drugs includes that of legal pharmaceutical drugs, not just of natural ones that are banned. His notion that pharmaceuticals have sometime replaced religion as a source for personal development was however not understood well by all in the room. Simply stated, previously people would rely on the church for answers to life’s questions, now big pharma often seems to help them out. 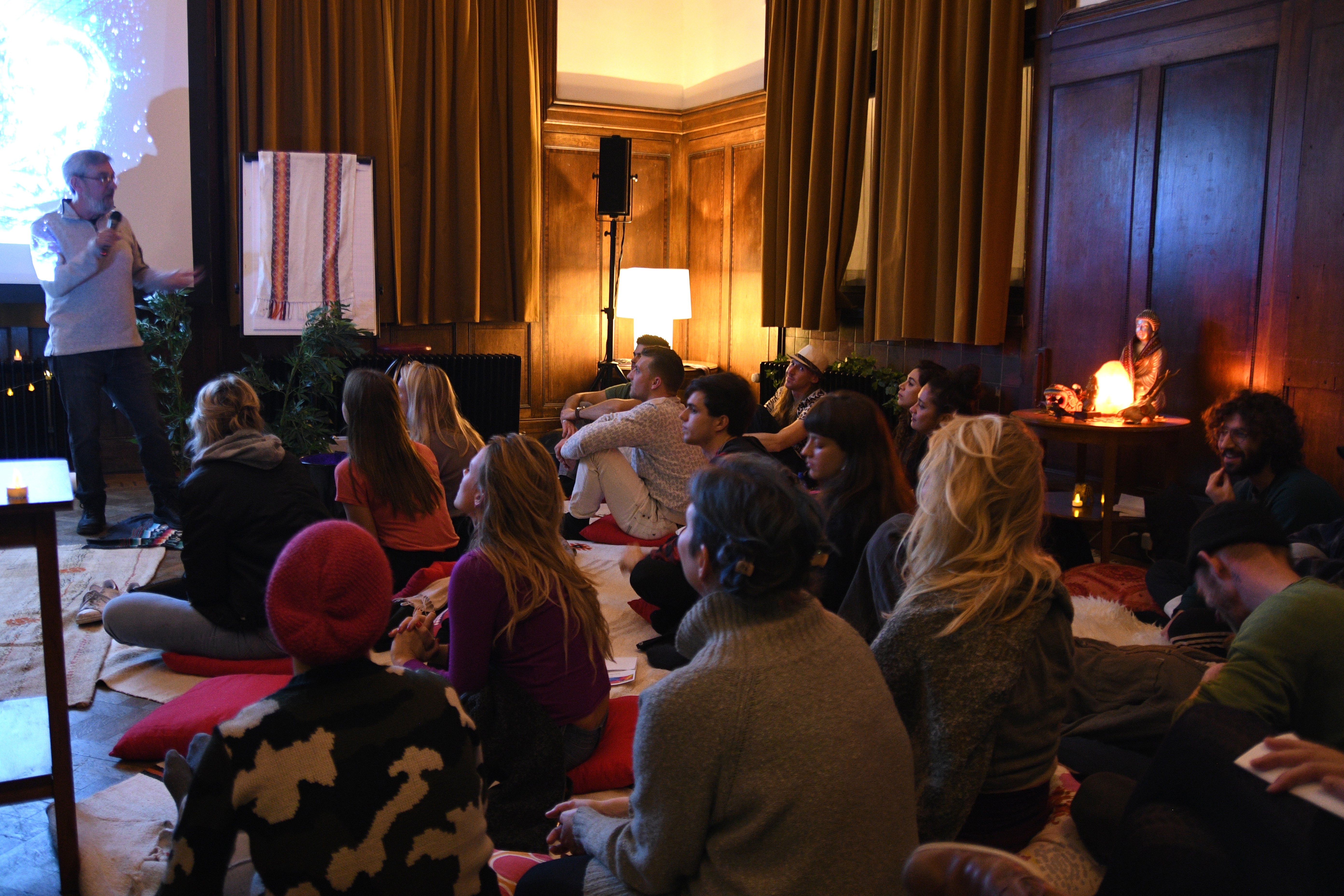 A recurring theme during the night was the recent verdict of the highest Dutch court, effectively banning ayahuasca, even within the context of a religious ceremony. The judges ruled that the ban on DMT, one of the active compounds in ayahuasca, is more important than the freedom of religion, as warranted by the Dutch constitution. If anything the verdict shows how easily Western governments violate the right to self-determination, the most fundamental human right.

Dutch artist Melanie Bonajo showed parts of her film ‘Night soil – Fake Paradise’, in which a number of women talk about their experiences with ayahuasca. One of them says: ‘I think that the people who see ayahuasca as a drug are really blocking themselves from wisdom. Which is a right, I guess, you have.’ Bonajo pointed out that women are often overlooked, also in the psychedelic community and talked about women who have overcome sexual violence through ayahuasca. She also explained how ‘ayahuasca tourism’ in Peru and other South American countries has led to some terrible excesses, including rape and lack of proper guidance during sessions.

The final speaker was Arno Adelaars, a Dutch writer and drug researcher who has published books on ayahuasca, psychoactive mushrooms and XTC. Standing in front of a fabulous drawing of plant hallucinogens of native societies by Richard E. Schultes, author of the seminal ‘Plants of the Gods’, Adelaars gave a crash course on these substances. He explained the history of ayahuasca in the Netherlands and the role of the Santo Daime church. Interestingly, quite a few of the first people who took part in the Santo Daime ayahuasca ceremonies in The Hague and Amsterdam were followers of Osho, the Indian guru formerly known as Bhagwan.

As Adelaars pointed out, the quest for a different kind of spirituality and religion led a lot of Western people to the East in the 1960’s and 1970’s, where they discovered hash as a spiritual tool. In later decades people travelled further and discovered the native South American spiritual traditions around peyote cactus, mushrooms and ayahuasca. Traditions that had been brutally suppressed by Western colonizers for centuries. As the Dutch ayahuasca verdict shows, this suppression continues to this day.

All in all the evening provided the attentive and diverse audience with plenty of food for thought and inspiration. Like this bible quote from The Book of Revelations 22, a clear reference to cannabis, according to Chris Bennett:

‘On either side of the river of life stood the tree of life, bearing twelve manner of fruits,  yielding its fruit each month: and the leaves of the tree are for the healing of the nations.’